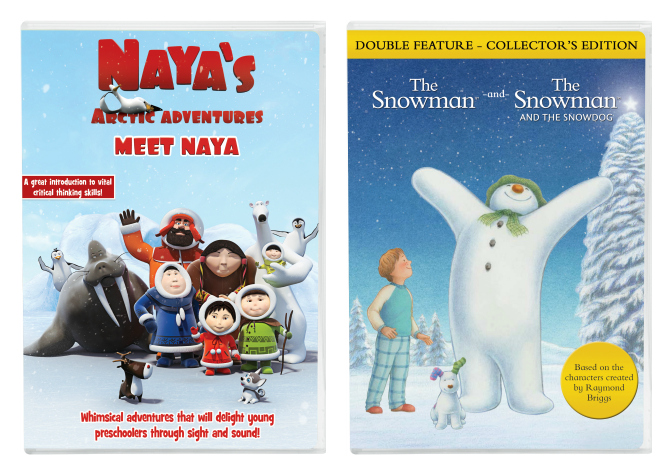 On a cold winter evening, grab a blanket and cuddle up on the couch to watch NCircle Entertainment DVDs: Naya’s Arctic Adventures and The Snowman.

Naya’s Arctic Adventures Meet Naya!
Join Naya and her friends as they embrace numerous quests in the Arctic. One might think that a young girl would get bored living in the Arctic but not Naya! Every day is an adventure with her and her friends. Each story starts with the sea washing ashore an item and then throughout the story, Naya and friends learn the purpose of the item. Your little one is sure to enjoy these heart-warming adventures that teach children fundamental human values all while enjoying a good laugh!

Snowman Double Feature: The Snowman and The Snowman & the Snowdog!
Relive Raymond Brigg’s holiday classic, The Snowman! One crisp, winter morning, a young boy wakes up to find a thick blanket of snow has covered the ground as far as the eye can see. Filled with excitement, the boy decides to build a snowman using a tangerine for his nose, coal for his buttons and eyes, and tops him off with a hat and scarf. Later that night, at the stroke of midnight, the snowman comes to life! The young boy and the snowman embark on a magical adventure of discovery where the snowman explores the young boy’s world and in return he takes him flying to his home in the North Pole. Upon arriving at the North Pole, the two join a party as the guests of honor to a very special person.

Then, embark on a new adventure in the charming sequel, The Snowman and the Snowdog! When a young boy and his mother move to a new house, the boy discovers a secret box hidden under the floorboards of his bedroom. In the box, he finds a hat, scarf, some lumps of coal and a shriveled tangerine – it’s a snowman-making kit! Later that day it starts to snow and the boy builds a Snowman and with the little spare snow leftover, a Snowdog. That night they come to life and take him on a wonderful adventure. As dawn breaks they fly home, but before the boy returns to bed a magical surprise awaits him…

One lucky winner will receive Naya’s Arctic Adventures: Meet Naya DVD and Snowman double feature (The Snowman; The Snowman and The Snowdog) DVD

Theresa M is the winner